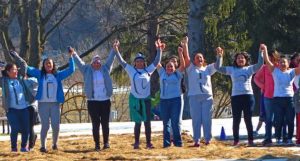 The intersection of criminal justice, policing, and immigration is a complicated and difficult area of law and practice. At the federal level, programs such as Secure Communities increase the criminalization and monitoring of immigrant communities, while at the local level, immigrant communities can be targeted due to race or perceived immigration status, and interactions with police are often further complicated by language barriers.

Local law enforcement agencies rely on community trust to do their jobs effectively. But people are less likely to go to the police when they are afraid that they or their family member could end up being deported. Ensuring that local police departments are interacting with immigrant communities in respectful and culturally appropriate ways is an important step toward reducing antagonism with, and fear of, police.

One critical issue is how local law enforcement agencies communicate with Immigration and Customs Enforcement (ICE). This can happen in many ways: formal honoring of immigration detainer requests, notifying ICE when law enforcement has non-citizens in custody, calling ICE during traffic stops if drivers or passengers are suspected of being non-citizens, and much more.

PICC is committed to supporting local and state policies that separate the duties of local law enforcement agencies from immigration enforcement. For example, PICC worked as part of the Philadelphia Family Unity Network (PFUN) to put an end to local police enforcement of ICE holds in the City of Philadelphia.

In January 2015, The Sheller Center for Social Justice at Temple University released A Changing Landscape: Pennsylvania Counties Reevaluate Policies on Immigration Detainers, a report on immigration detainer policies across Pennsylvania. According to this report, about half of Pennsylvania counties no longer hold individuals in local jails at the request of U.S. Immigration and Customs Enforcement (ICE) after they are otherwise eligible to be released. Many counties revised their policies in the wake of a 2014 federal court ruling in Galarza v. Szalczyk, which found that so-called “ICE holds” or “ICE detainers” are discretionary and leave local agencies that honor them open to legal liability. Others cited the fact that ICE detainers diverted critical resources away from local law enforcement needs. Counties from all across the state have adopted new policies and practices. The list includes western counties, such as Westmoreland and Clarion, and eastern counties, such as Bucks and Montgomery. This report was prepared in close collaboration with PICC, and the ACLU of Pennsylvania.

Since 2015, PICC has been a member of the Campaign to Shut Down Berks, a grassroots coalition fighting to shut down the Berks County Family Detention Center and end family detention. Pennsylvania is currently home to the Berks County Family Detention Center (BCRC), one of three detention centers for immigrant families, where children as young as two-weeks-old have been incarcerated.