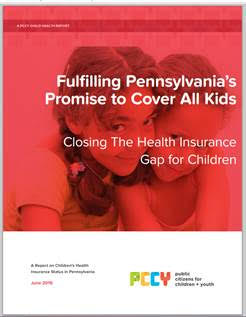 Public Citizens for Children and Youth (PCCY) recently released Fulfilling Pennsylvania’s Promise to Cover All Kids – Closing the Health Insurance Gap for Children, a report on why CHIP coverage should be expanded to include undocumented children. An estimated 24,000 Pennsylvania children are undocumented and uninsured and do not qualify for CHIP, Medicaid, ACA Marketplace coverage or Pennsylvania’s Cover All Kids program. PCCY interviewed 53 parents in southeast Pennsylvania with children who are undocumented and uninsured and found that more than 8 out of 10 parents said they had to delay or forego health care for their child due to lack of insurance. Among these families, PCCY found:

These findings are consistent with years of academic research that shows uninsured children have worse health and life outcomes than insured children – and cost the system more on average. CHIP costs an average of $2,500 per child per year – almost half the $4,600 that a leading Pennsylvania pediatric hospital spent per child in uncompensated care in the last fiscal year.