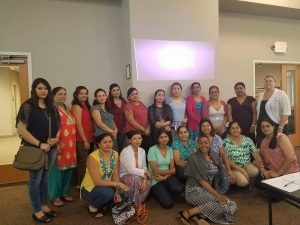 The Bhutanese Community Association of Pittsburgh is a locally formed non profit incorporated in the State of Pennsylvania in 2012. It is known by the acronym BCAP. The Bhutanese community is comprised of  a little over 5000 residents distributed in 10 different neighborhoods in Allegheny County (the greater Pittsburgh community). They are comprised of first settlers coming directly to Pittsburgh under the government’s refugee resettlement program as well as secondary migrants from other cities and states since 2008. Pittsburgh has been a welcoming city for Bhutanese refugees from other cities due to job prospects, low crime, affordable housing, good education and hospital care, and above all the friendly people, climate and topography.

BCAP serves the community through English language learning, civic education with the goal of gaining naturalization, the Parent-Child Cultural Club to encourage bilingualism, holistic yoga classes, women & girls leadership, youth activities, and much more. They also work with PICC and PA Voice to conduct civic engagement to encourage voter registration, voter trainings, and “Get Out the Vote” so that the Bhutanese community are engaged, active constituents in the Pittsburgh area. You can follow and support BCAP through their Facebook page.